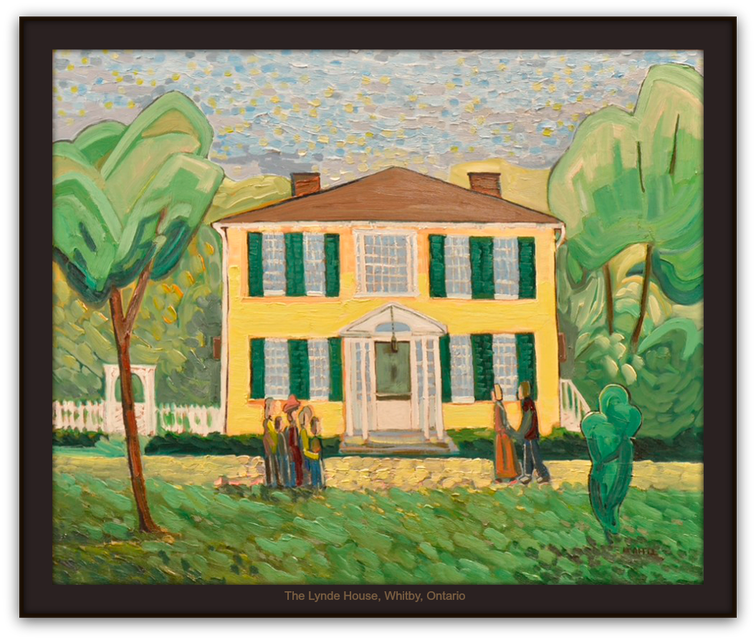 The Lynde House in Whitby, Ontario is more than just an old building to many Whitby residents, and to this artist and my family. When we moved into Whitby in 2004 Cullen Gardens and Miniature Village, being just a few blocks from our home, was a fully functioning tourist attraction. It's visitors came from far and wide to see the wonderfully manicured gardens and buildings in the world famous miniature village.
When we first visited our children were very young and it was such a magical experience for them that we bought family memberships each year so we could go at will and go often. The most wonderful occasion was certainly Christmas. Cullen Gardens lit up with Christmas festive lighting everywhere. The miniature train wove it's way all through the miniature town, itself decked out for Christmas. My children, and we big kids (the parents) eagerly looked forward to each visit.

As the world turns and life moves on, so also did the Cullen Family. There came a time when the family decided they were ready to part with their treasured destination and they decided to place it up for sale. The short story was that there were no takers. Even when the miniature village was offered up for sale there were not significant enough offers to purchase them, and they remained in storage for years after the grounds closed up. A heart breaking thing if you were like us and have such wonderful memories of the place.

Once again the wheels of progress have continued to turn, the Town of Whitby has become the owners of the property and the buildings, and in an effort to preserve them an arrangement has been struck where the Lynde House, the most prominent historical building on the site, will be moved to a location inside the old part of downtown Whitby. There it will become the new home for the Whitby Historical Society. This is wonderful news. Now visitors to Whitby will have a wonderfully maintained piece of Whitby's history where they can visit, enter and enjoy a snapshot of the past, right in the heart of the town, along the main drive through town, Brock Street.
Some months ago, before I had any knowledge of the impending move of the Lynde House, I embarked on a painting of the building. The reason was simple, I just wanted to capture it as it was in a permanent record. My painting would tell a story of a building that has been enjoyed by hundreds of thousands of visitors since it's public opening. My painting would present The Lynde House in it's full sunlit glory with happy families and couples eagerly approaching it's entrance. The family on the left signifies my own family of young children, the couple on the right signifies the appeal of the Lynde House to all ages.

I have decided to donate this painting to the Whitby Historical Society, to be hung in the Lynde House once the building has been settled and made ready for visitors again. As a testament to it's glorious past. May you go to visit, and go often.